It’s always great to have feedback and even better when it’s so positive and from the children themselves.  Recently Dan visited Christ Church School in Ware,  where he met Jack O’Reilly, who was the lucky winner of the World Book Day competition when he dressed up as his favourite character for the Jamie Johnson series.  Jack has written about what it was like to win the competition and meet Dan.

Jack has already been featured on the website with a story that he wrote with his best friend Eddie. 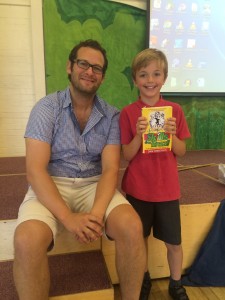 When Dan Freedman came to school

Finding out I had won

A few weeks later (when I had forgotten all about the competition) my mum said that an email had come through for me. I was really excited but I had no clue what it was about. The first couple of words I saw were YOU HAVE WON! Then I instantly knew what it was about. I was jumping up and down on the sofa and went out into the garden and booted my football high in the air and then I slid on my knees with glee. Then I took it all in and read the email properly. It was from Dan Freedman and it said: Congratulations Jack! I am pleased to say that you have won the Jamie Johnson World Book Day competition and I’m coming to visit your school in person. I was so excited!

Finally, the day had come! Me and all my friends were staring at the gates waiting for Dan to arrive. At last, my mum came and got me from my classroom. I instantly sprinted out the door, down the corridor and into the hall to meet Dan in person. I felt amazed that I could actually see Dan in person in front of my eyes. I showed Dan all my books. He was very friendly and I was so pleased that I had entered the competition.

Next, the teachers got everyone in the school to come and see Dan. I felt so special. Then, Dan sat down and started to tell everyone about his books and his life as an author. He told us quite a few things, even about when he worked for the FA, and he asked us lots of questions. When nobody knew an answer he always turned to me.

After the talk, most of the people in my school came to the hall to buy Dan’s books and ask him to sign them. There was a massive queue for the books and the book signings and of course I got all of my books signed. In one of my books Dan wrote a personal message about my favourite football team Leyton Orient.

The next day at school, everyone was talking about Dan’s visit, even the teachers. Everyone was thanking me and some of the older pupils had even read most of their book already. It was a great day and I really look up to Dan.

I hope you enjoyed this as much as we did.  If you would like to read some more from Jack,  you can read the first part to his exciting story here…

‘FC Leysenal on the road to Champions League glory’