Recently Dan had the pleasure of visiting Christ Church School, Ware.  It is always fantastic to see the students being inspired to write after a visit, and he was thrilled to have some amazing pieces of writing from two of the children.  Dan loves reading young writers work and this piece is great!

Jack O’Reilly has written a fantastic review about Dan’s visit and has also been working hard, with his best friend Eddie, to write a football story.  They have given up their breaks and ‘Golden time’ to finish the the story and they are working on the second instalment during the summer holidays so keep watching. Prepare to be on the edge of your seat! 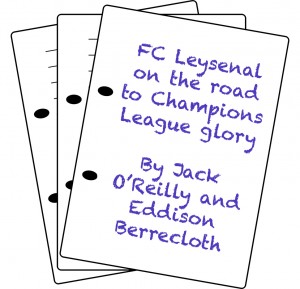 FC Leysenal on the road to Champions League glory

By Jack O’Reilly and Eddison Berrecloth

One day, there were two grown men called Jack O’Reilly and Eddison Berrecloth and they wanted to build their own football team. So they decided to scout the best players from all over the world.

It was five minutes until kick off and Eddison and Jack were talking to their team. Finally, it was kick off…FC Leysenal v Totham (15 minutes played). Leysenal were 1-0 down. Suddenly, Ted King booted the ball up to Congo Bonny, who made a magnificent run all the way to the penalty area where he gracefully skilled out the keeper and belted the ball into the back of the net. Bonny skidded onto the grass and whacked the corner flag with all his might. FC Leysenal 1-1Totham.

But in a flash, Totham’s left winger, Charlie Rango, scored a screamer of a free kick. Gary Woods was on the ground and injured, so they brought on Eddison Berrecloth and put him in goal. 45 minutes played, FC Leysenal 1-2 Totham.

Leysenal put Jack O’Reilly on for Paul Matuiti in central attacking midfield. All of a sudden, Jack O’Reilly broke into a chance. He was rampaging through the defence and now he was one on one with the goalkeeper. Suddenly, Jack stopped then when the keeper dived on the floor he cheekily chipped the ball into the back of the net. O’Reilly rushed over to the fans and hugged them for his first goal for FC Leysenal! Half-time: FC Leysenal 2-2 Totham.