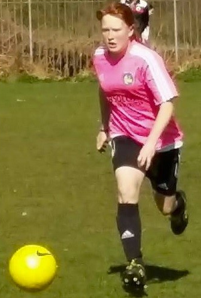 Congratulations to the May JJ Fan of the Month, Megan!

From:- Near a town called Scunthorpe

Football Idol:- My football idol is Steven Gerrard, as not only did he play for England, but also for the team that I support, Liverpool. My boots are always tied with the ‘Gerrard’ knot, which is good luck, created and tied by my manager.

Heard about the JJ books through:- In primary school, I was looking for an interesting book to read, preferably about football, and the JJ books caught my eye. Straight away, I fell in love with the first book, and came back nearly every day for more. My teacher had also shown them to me before, but I didn’t try them back then.

Like the books because:- I like the JJ books because they are realistic, funny, creative, but most importantly they are about football. They also encourage girls and boys to play football, or to try it, even if it’s just another way to have fun.

Favourite Jamie Johnson book and why:- I love all the JJ books, but if I had to pick one, it would be ‘Final Whistle’ because Jack and Jamie are both very dedicated, and the book is very funny and, like always, realistic.

Which football team do you support:- I have and always will support Liverpool.

Which position do you play:- I am a striker, and have scored 26 goals for my team this season.

Which player reminds you most of JJ:- Cristiano Ronaldo, because of his skills, pace and now his strength, which Jamie is like in later books. Also, Ronaldo grew up with a hard life, like Jamie.

If you could bring one character from the JJ books to life, who would it be and why:- I would bring Jack to life, because she is my favourite character. She is funny, creative and we need more women football players in the world, preferably like her.

Best goal ever seen:- The best goal I have ever seen was by one of my friends, the goalkeeper in our team. We were in the final of the Lincolnshire Girls U11’s cup, and 1-0 down against a much bigger side. In the last two minutes, we won a free kick on the edge of our goalkeeper’s box. Understandably, the goalkeeper took it, and miraculously- though not surprisingly as she had been trying all season and all day- chipped the ball over everyone’s head, including the other team’s keeper. Thanks to her, we eventually won the cup on penalties. You can see the goal below! 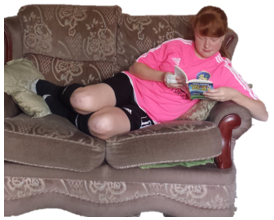 Are you a big JJ fan or do you know one? Get in touch and they could be the next JJ Fan of the Month like Megan!