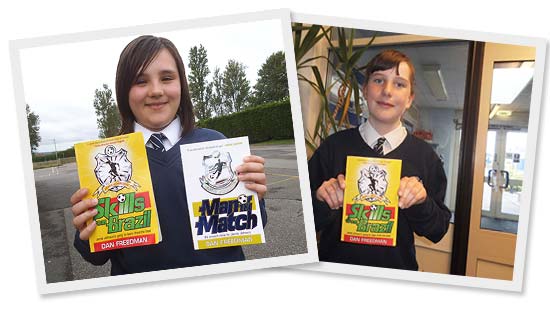 Recently I visited a fantastic school in Poole called Hamworthy Park Junior School. I told them that Skills From Brazil is based around a big football match between the Teachers and the Pupils at Jamie Johnson’s school.

The kids loved this idea and wanted to write their own Teachers v Pupils story. And here are the best two, by Hannah Day and Ruby Moore.

I hope you like their stories. I certainly do.

I think I may have some competition!

What I experienced yesterday was unexplainable, unbelievable and unexpected!  It happened at 2:15 on the field in fancy dress.  My friends and me played the teachers in a footie match.  It was epic!

As I stepped onto the pitch, the crowd roared.  We waved our hands in the air, even though they were clammy with dread.  When the teachers came on everyone booed!  Unlucky for them ‘cause we knew we were going to win.  Mr. Lumber (the raging referee) blew the whistle and again the crowd cheered.  But too loud for my liking!  All of a sudden it went dark and the air became icy.  My insides did somersaults and tied themselves in knots.

I knew it was for fun but I just had to score a goal.  With the ground soggy it was slippy and everyone was falling over.  None of us were as big as the teachers but, even us, were playing better than them.  We had to win!  Only one thing was stopping us and that was fear.  Overcome and now defeated.  Emma was beside me and ready to pass, but one of those sly teachers tripped her up and sent her high in the air!  My legs still smothered with mud, I charged like a bull at Mrs. Davies and stole the ball!  That’s how I roll!  Edging my way towards the defenders and dribbling the ball, I saw Mr. Lumber give a teacher an energy drink, what a cheater!  Concentrate … come on you can get past him.  I turned … and … tripped!  Right over his foot and he took the ball.  Suddenly, sparks of pain zipped through my leg and a penalty was made!

Unfortunately for me, I had to take the penalty whilst all eyes were on me.  I could feel the sweat balls (on my arm) trickle down.  It was terrifying!  I steadily placed the ball down and walked backwards.  Frozen, I stood there stupidly but then charged at the ball and like an arrow to its target, the ball soared through the air and landed in the back of the net … I scored!  First goal of the game!  Yippee!

For a while the game carried on, skipping half time.  Since then, we had scored another 4 goals.  All of a sudden, Mrs. Davies, the pro, fell over the ball and over her pride.  I just had to say, “Enjoyed your trip? You forgot to send me a postcard!” Because of this all the teachers sat and had a cup of tea!  We scored another goal!  Then they got up, raring to go and kicked ferociously at the ball but missed.  Then the whistle went.  We had won 6-0!  Reeeesult!

My eyes welled up and tears of joy rolled down my cheeks! For a punishment of losing, we had to soak the teachers and we got no homework for 1½ years.  Sun came from behind the clouds and we danced in victory.  We won and beat the teachers!

The whistle blew.  This was it.  It was time to show the school who Jamie Johnson really was.  Nothing could go wrong.  It had been raining all day, so the match was inside.  Five minutes in, and Mr. Pratley had already scored a goal.  To make matters worse, one of the best players is off sick today.  This was not going well at all.

Jamie took a shot at the ball and scored!  15 minutes in, 2-1.  Rafael tries to head for the ball, but he kicks the ground instead!  He was taken out by the school nurse, who has been watching all the time.  Jamie was left in charge and felt sorry for Rafael, because it wasn’t his fault.  “Come on Jamie, you can do it!” he mumbled to himself.  He had to do something, fast!

It was half time, 3-1.  It was getting worse every minute.  Suddenly, Jamie got a terrible stitch.  He had to go out of the game and, in agony, just watch the game.  “Great!” he said sarcastically.  Just 10 minutes later, 4-2, Jamie couldn’t bear it anymore.  His stitch was worse than ever. He refused to let it get to him.  He was strong.  He got back in the game!

Jamie limped over to the pitch with what he thought was the worst pain ever.  The mixture of hail and rain was beating hard against the windows, so it was difficult to concentrate.  The ball rolled over to Jamie.  He shot, he scored!  It’s down to 3 minutes, 4-3. Suddenly, a dark, familiar face uplifted the crowd’s dim atmosphere.  It was Dad!  A sudden surge of excitement flowed through him.  He had to win.  Jamie zoomed over to the ball.  He scored a goal, and another and another!

The pupils won.  Jamie ran up to his Dad with all his remaining energy, which was not a lot.