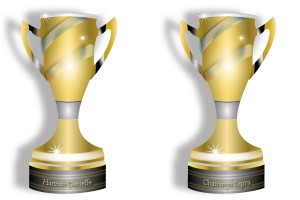 Well done to Hannah Denieffe and Chaitanya Saprathe who were the  writing competition winners at Saint Bernadette’s School. These are two amazing pieces of writing that will keep you on the edge of your seat!

It was the day of the trials.  Jamie (who was awake bright and early), only had one thing on his mind:  The trials.  He had this feeling he could do it.  Make it to the team.  Nevertheless he had a doubt that Dillan (the bully) would hurt him.  What if he did? What would happen?  In his mind, he would tell everyone, even his mum, but he realised that telling others may not be a great   idea; it might cause the bully (well if he ever found out) to get more vexed and jealous.  Then Jamie realised he had to get his boots his mum confiscated.  How?  It was impossible, but then a lightbulb struck his mind.  He had a plan (no, a great plan). For once he would be good (gooder than gold) .  He would not lose his temper.

Jamie ran down the stairs full of excitement, hoping his plan would work.  He spotted his mum in her grey, boring, plain pyjamas preparing breakfast.  Sometimes he just wished Dad hadn’t left, as mum was finding it incredibly tough.   Mum looked at Jamie in a way he had never seen her do before, and he smiled at her and then started to speak.  “Mum would you like some help?”   “No Jamie why would I trust you? you’ll just crack the plates.”  Jamie then pleaded his mum to give him another chance and said he wants to be good.  His mum reluctantly replied, “Jamie I will give you one more chance but I know what you’re after;  your football boots.  I want you  to know I am not mean I will give them you  on one condition ,that you promise to be a nicer boy.”  “I promise with all my heart.”  Jamie said half heartily.  He waited and waited and  waited until finally his mum gave him his boots he had not seen for what felt like a millennium.  As he was so happy he ran off to school to practice the skills he would need to show to be a winner.

When he got to school, he ran straight to the football pitch and opened his book that his grandfather gave him on page 6.  It was the double drag back and the overhead kick.  He had been working so hard on these skills for yet so short a period, he hoped he would be able to do it now he was on the school pitch.  Just as he did the skills perfectly Dillion walked up to him. Dillion began to be mean to Jamie saying that the skills he just performed was rubbish and he could do it 10000 times better.  While he was actually jealous and scared that he would not make the team.  Just then the bell went for school.

During the whole day, Jamie couldn’t take his mind off the trials. He wanted it so badly, he wanted to prove everyone wrong that he was the best player in the school and not Dillion.  In his head, he desperately went through all the moves he could do to prove them wrong.  He could hear a large crowd cheering for him in his imagination.  I can do it Jamie thought, but every time the teacher told Jamie to concentrate he felt one step further away from accomplishing his dream.

Around 2 hours later Jamie jogged onto the pitch.  This was the most important moment of his life. Doubts speedily sprouted in his mind like plants.  Then the ref blew the whistle and commanded ,“Into positions now.”  His life was a hundred  times harder   now he knew Dillion was one the opposing team.  This would just make him even more of a target to get injured.

The first half of the game did not go Jamie’s way.  He was like a ghost apart  from the one time he got the ball and a made a minor mistake.  This caused his team not to trust him.  They were losing 5 nil.  When half time came, Jamie was relieved.

At half time, Jamie had an orange to nourish him well for the next part of the match.  He knew he had to turn it around if he had any chance of getting into the team.  He would start afresh and save the day.

After 15 minutes, Jamie stropped back onto the pitch a loser 5 nil but he was determined to prove he deserved to be on the team.  He knew he was the best!  The whistle went  and the ball met his feet.  Jamie knew this was his chance.  He sprinted  towards the goal outsmarting the defenders.  This was his chance he thumped the ball and scored!  Now he was one small step closer to his dream.  Jamie couldn’t stop.  He kept sprinting like Antonia Valencia ,(his inspiration) and scored not one, not two, not a hat trick , four goals!  He was unstoppable.  Dillion kept trying  to bring Jamie’s glory down but he couldn’t .  Jamie was way too potent. While Jamie tried to stop Dillion, from hurting him and stop them losing, the same person who scored 4 goals scored another. Jamie was heartbroken but then he had just been awarded a penalty for what Dillion had attempted to do to him and Dillion had been sent off.

Jamie was standing ready to take that all important penalty that would be the make or break for Jamie and his team. Dillion maliciously grinned at him and said “Don’t miss, Don’t miss.”  Jamie whispered to himself , “I can do this.” I t all came down to what angle he kicked from, what foot he used and how much power he used….

On the day of the trials Jamie was so excited that he snatched the bus tickets off his mum and ran to school.  The first thing he did was go to Mike.  He gasped, where was Mike?  “Mike.” he exclaimed several times while running here and there with his beady eyes fixed on the area.  Suddenly, he tripped over a stone and right in front of him was a note.  A note saying this –

‘Jamie, you never knew that I spy on you and I did it yesterday.  I know how little this means to you so I have trapped Mike as well as put the stone there! Yours hatedly, Dillan!’

Jamie was horrified!  At once he knew where to go, but he stopped smiling, what about the trials?  It was already 9:00 and the trials were at 9:45!  But Mike was more important than anything.  Jamie was sure he could find him in less than 45 minutes he thought.  That conversation in his head took him to the right answer, SEARCH FOR MIKE!

Before he could even set off, he gasped.

“Mike,” Jamie exclaimed. He was buried in a hole just behind him. “Oh Johnson.” How happy I am to see you!”  Mike exclaimed gladly.

“Reach as high as you can and hold my hand”  Jamie said.  Luckily he helped Mike up safely. “Oh my gosh!”  Jamie told Mike that he was afraid he would miss the trials so he had to go immediately. “Goodbye.”  They said to each other.  Jamie was late!! Hurriedly he ran on to the pitch as it was 9:46!!  There was one final kick left for him, he ran to see if he could get the ball, remembering all the ticks that Mike had taught him and finally he got to the point where he could shoot!  Suddenly Dillan knew that he would told off if he hit him so instead he ran to the goal ready to block or catch the ball.  Jamie worriedly kicked the ball and…he scored!!  Mrs Philipene, Jamie’s teacher called Jamie to hand out some letters, they were about who passed the trials.  He quickly flicked through the letters and saw Mr Philipene give him a sharp look.  Jamie handed them out and there was his letter! HE HAD PASSED!!

A smile grew on his freckled face.  So a happy ending for Jamie but what about Dillan?  Well, Jamie handed over his letter – he had failed.

What a happy day for Jamie!