My fifth Tip for the Top is…

Club and league: Udinese, Serie A

Overall assessment: Standing at 6’3’’, it is no surprise the young ‘keeper has a commanding presence in his penalty area. Despite what seems to be an immature age, Scuffet is the polar opposite; keeping meaningless mistakes to a minimum. His acrobatic saving style is something to be admired, although he can over-exaggerate comfortable saves, which can often lead to opposition corners or a tapped-in rebound. Nonetheless, he is fast becoming Udinese’s Mr Reliable between the sticks, with match and point-saving performances to keep out even the most dangerous of Serie A attackers.

Prediction for future: I have a sneaky feeling we may see Scuffet at Old Trafford in the future! He has been linked with a move to Manchester to replace Sergio Romero, and if the Argentine, or David de Gea leaves, then there is an opening in the goalkeeping position for the Italian Scuffet to exploit! If Mourinho turns him away, perhaps a move to Juventus as a long term replacement for Gianluigi Buffon to fulfil his dream of winning the Serie A, or maybe even a deal involving Barcelona or Real Madrid, where both sides need to strengthen in their respective nets.

Rafa’s view: Personally, I think Scuffet should stay at Udinese and wait for de Gea’s imminent departure from Manchester United. Then, he’d be able to stake a claim for the number 1 jersey and not have the world’s best goalkeeper standing in his way! In terms of his play style, I really like the Italian as he is quite like ter Stegen at Barça or Ederson at Manchester City. He isn’t afraid to bring the ball out with his feet and pick a pass, which proves his exceptional maturity. 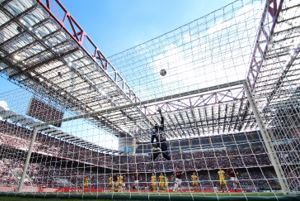