I recently visited a school in Walsall to talk to the pupils and run a writing workshop.

During the writing workshop a pupil produced a piece of Jamie Johnson writing that was so good, I asked if I could publish it on my website.

So here it is. Fantastic stuff. 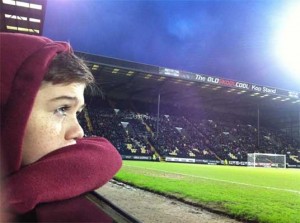 Jamie Johnson stepped up to the penalty spot, the seed of doubt he had planted in his own mind was growing and spreading. He froze. Rooted to the spot his mind suddenly went back…everything felt much larger…Dylan, the coach and all the other team members felt like giants with him like an ant in comparison.

That’s when he was a five year old boy again, back home in his garden with the rusty old goal post and his older cousin, Ryan, standing in the goal ready to protect it from Jamie’s shot.

“I can’t do it” young Jamie complained and tears spilled from his eyes.

Most people would have given up on the little boy and left him to cry but not Ryan.

The older cousin just smiled and said “look Jamie we’ve been practising all afternoon and I’d be a monkey’s uncle if I let you stop now.”

A look of astonishment was plastered across the young boy’s face and he called out “but I’ve never scored against you, I’m rubbish, I just can’t do it”

Jamie’s cousin gave him a wide smile and walked towards the young boy. He squatted down so he was just his height and put an encouraging hand on his shoulder.

In an optimistic tone of voice he said “look Jamie you know that poster on my door, the one of my favourite player, some day you’re going to be that player, do you promise you’ll be that player Jamie?”

A new sense of loyalty and encouragement filled his heart and he was ready. His cousin moved back to the goal post then Jamie took his shot.

Back on the pitch he was no longer an ant, something inside him was changing and the seed of doubt had disappeared. He was no longer the ant, everyone else was and he was on top of the world. This was his chance now, to prove himself and make his cousin proud.

“Just shoot would you, we haven’t got all day” Dylan yelled with spite eminent in his voice.

Jamie balled his fists in anger then looked to the goal; he whispered to himself “I will” then kicked the ball.

The ball seemed to fly at an impossible speed over the players’ heads and they stared in wonderment as it sailed into the goal before the keeper even had a chance to move. He had scored the goal.

He was bursting with pride and everyone else was cheering and clapping for him. Jamie was ecstatic and he couldn’t help but grin, however one feeling that overpowered all the others was fulfilment. He was one step closer to that poster!