Every month, we run a competition where one or more fans are named as the JJ Fan of the Month! These fans could be anyone – from anywhere around the globe. He, she or they could come to our attention in several diverse ways, for example, at a school Dan attends, a piece of writing he or she sends to Dan, or a fan-mail or letter that they have sent. We like to have an interview with the winners as well.

Congratulations to the May Fan of the Month; Jack! He came to our attention after he sent in a nice email, with questions for Dan, a video saying why he thought he’d be a great Fan Of The Month, AND a clip of his best skills; including “A Mágica” and “the Stepover,” which both appear in Jamie Johnson books! You can see the two videos in this article! 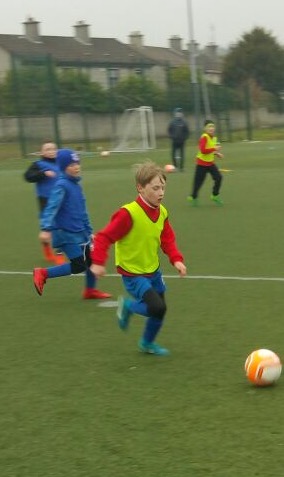 Where are you from?:- I was born in Hammersmith, lived in Fulham, then moved to Nottingham, Sheffield, and then I moved to Galway in the West of Ireland where I still live!

How did you discover the JJ books?:- I discovered the JJ books when my friend recommended them to me. I was 9 years old at the time.

You are offered to go to three schools- The Grove, Kingfield or the Foxborough Academy School. Which one will you join and why?:- I would join Kingfield as Jamie went there and seemed to enjoy it- apart from one person- Dillon. I think I would enjoy the soccer and maths in Kingfield.

Why do you like the books?:- I like the books mostly because they are about soccer (which is my passion!) but also because I find JJ a very interesting character.

Apart from Jamie, if you could befriend any character from the series, who would it be?:- Harry Armstrong – because he is a bit like me; in the way he is very passionate about soccer and can get frustrated when things don’t go right in the football world.

What is your favourite JJ book and why?: I love “Man of the Match” because I think it was probably the most interesting book that Dan wrote. I liked it because it brought in a few new characters like Raymond Porlock and Mattheus Bertorelli.

If you wrote a JJ book yourself, what would you call it? Why?:- I would call my book “Trials for Legends” as “Legends” would be the name of my own dream team, filled with legendary players. In my book, this stage of Jamie’s career would focus on him playing with players such as Messi, Pele and Beckham. The book would be based on Jamie getting trials for Legends and the obstacles along the way.

You are the manager of a 5 aside football team. Which 5 players, real or fictional, will you sign and in which formation will they play?:- I would probably sign Messi on the right wing and JJ on the left wing. Coleman would be in the right full-back position and Marcelo as left full-back. De Gea would be in goal.

If you could play for any football team, in the real or JJ World, who would it be?:- Chelsea- since I was 2 years old!

What is the best goal you have ever scored?:- A scorpion kick- I scored against my best friend in 1 v 1 match. That was my best ever goal by far!

If you could ask JJ one question, what would it be?:- I would ask JJ what led him to support Hawkstone United – was it because of family or just personal choice?

Do you want to be named a JJ Fan of the Month? Do you know anyone who wants to be? Get in touch at dan@danfreedman.co.uk and you could follow in Jack’s footsteps!