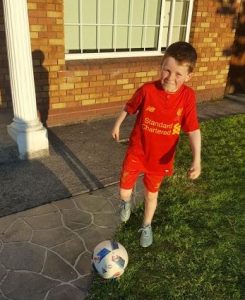 Every month, we name a huge Jamie Johnson fan as a Fan Of The Month! This fan could be anyone, from anywhere around the globe. He, she or they could come to our attention in several different ways, for example, at a school Dan attends, a piece of writing he or she sends to Dan, or a fan-mail or letter that they have sent. We like to have an interview with the winner as well.

Congratulations to Joseph – He is October’s JJ Fan Of The Month!

Where are you from:- Kilkenny, Ireland

Who is your football idol?:- Neymar

How did you hear about the JJ books?:- I saw them in the library

What is your favourite Jamie Johnson book and why?:- My favourite book is Final Whistle, because it has transfers in it.

Which position do you play?:- Right midfield

Which player reminds you most of JJ?:- Mo Salah or Sadio Mané, because they’re super fast.

If you could bring one character from the JJ books to life, who would it be and why?:- Jamie, because my team needs left-footers!

If you had the choice to play for either Scotland or England at a World Cup, who would you pick and why?:- England, because they would have a better chance of winning!

If JJ offered to teach you one skill, which one would it be?:- The Overhead kick.

If you could play for any football team, in the real or JJ World, who would it be?:- Liverpool or Hawkstone.

Do you like any other sports other than football?:- Yes, I like hurling (An Irish sport with sticks).

If you wrote a JJ book yourself, what would you call it?:- Hat-Trick Hero.

Apart from Jamie, if you could befriend any character from the series, who would it be?:- Mike.

Do you have any special football skills?:- Not really, but sometimes I do the occasional step over.

If you could ask JJ one question, what would it be?:- How do you do all of your skills? 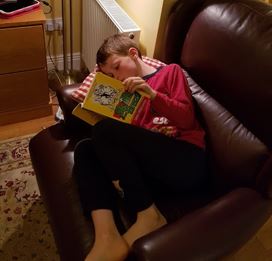 Are you a big JJ fan or do you know one? They could be a JJ Fan of the Month like Joseph! Email Dan at dan@danfreedman.co.uk!