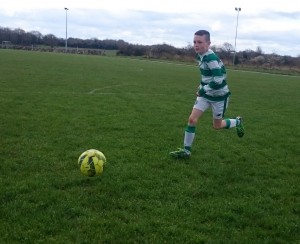 It’s always great to hear of football players that are passionate about their sport and strive to be the best that they can be.  I have recently heard of one exciting young player and was keen to find out just how much the game meant to him and how hard he has worked to improve his skills.

Finn is a talented young player from Ireland who has managed to achieve a great deal by hard work and natural talent.  At 10 years old he plays for Craughwell under 11’s as a right winger – his favoured position, and is hoping for a future career as a pro footballer. He attributes his skill to practice and playing as much as he can-which he is quite happy to do! His speed and ball control make him a very dangerous player.

It’s not all fun on the pitch and Finn remembers recently during a big game with the scores tied, he missed a chance to score, but thankfully helped to score the winning goal.

He also remembers his best moment, when playing the best team in the league, scoring 2 goals and setting up three, and his team winning the game. It’s times like this that keeps him striving to get better.

When he’s not on the field, Finn loves reading and his favourite books are the Jamie Johnson series, which he started reading a few years ago and was hooked!  When I asked him what he likes about the books he said there are other football books out there but “Dan’s are definitely the best!”

In terms of advice for others Finn says: “Keep getting up, until the world is tired of knocking you down” . What a great quote! I may use that one myself!

My football idol is a Celtic player called Kieran Tierney. He is only 18 but has just been nominated for young Scottish player of the year in his first season. He has also made his full Scotland debut too. I met Kiaran in November when he was in Ireland to play for Scotland under 19s.  My dad contacted him on twitter and asked if I could get a picture taken with him and he was very nice. A lot of other Celtic fans really like him because he always has time for the fans which not many players do. 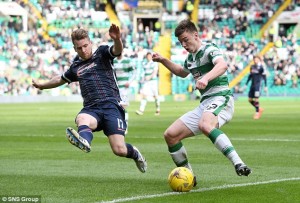 Best goal I have ever seen was in the world cup in Brazil in 2014. James Rodriguez goal against Uraguay. It showed great skill and composure.

Prediction for winners of Euro 2016:–

I think Germany will win Euro 2016 because of their experience and they have a well balanced team.

Favourite Jamie Johnson book and why:-

My favourite book is World Class because Jamie Johnson is at the height of his career playing in the world cup and taking Scotland to their best ever finish in the world cup. It showed that Jamie had worked really hard to get there and how good a player he had become because of all his hard work and practice.

If you’d like us to profile you on DanFreedman.co.uk, please get in touch and let us know your story…