Congratulations to Josh – he is the June JJ Fan of The Month! He came to our attention after sending in a nice email to Dan as well as a video tutorial, showing us how to do “The Snake”! You can watch it below so make sure you turn the volume up to hear how to do it! 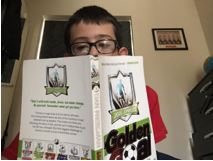 When did you start playing football?:- I started in Year 1 when l was about 5. Next, l played for Ravens Under 9’s, and for Brookfield when l was in Year 5. Currently, l play for Springfield.

Who is your football idol?:- It’s got to be Cristiano Ronaldo!

How did you hear about the JJ books?:- Well, last year l watched the first programme of Jamie Johnson. It said, “Based on the books by Dan Freedman.” l really enjoyed that episode, so l went straight onto Amazon and, – with my pocket money, of course – bought all the books!

Why do you like the books?:- They are just very thrilling and make you want to read on. I have already read the entire series about 3 times! They also were a “clue” to Series 3 of the CBBC programme.

If you could bring one character from the JJ books to life, who would it be and why?:- Although JJ is very tempting he might lose his temper, so l think would bring Mike Johnson to life, because he once played for Hawkstone so l would want to learn all the tricks.

What is the best goal you have ever seen?:- Oliver Giroud’s Scorpion Kick in 2016 for Arsenal against Crystal Palace!

If you had the choice to play for either Scotland or England at a World Cup, who would you pick and why?:- England, because they have a lot of world class players of whom l would love to play with.

If JJ offered to teach you one skill, which one would it be?:- The Flip-Flap, or, as it is known in “Golden Goal”, the Snake!

If you could play for any football team, in the real or JJ World, who would it be?:- Hawkstone, because the of atmosphere and how they relate to my team, Sunderland – you don’t know what’s going to happen next; Are they going to win the league? Or are they going to get relegated 2 times in a row?!

Are you a big JJ fan or do you know one? They could be the next JJ Fan of the Month like Josh! Email Dan at dan@danfreedman.co.uk!