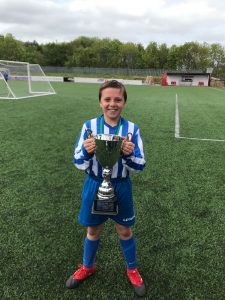 Each month we profile some of the biggest Jamie Johnson fans from around the globe. Congratulations to Jason Bradley-Irvine who came to our attention after Dan received a really nice email from him. He is this month’s pick!

Where are you from:- Belfast

Who is your football idol?:- Ryan Giggs

How did you hear about the JJ books?:- School library

Why do you like the books?:- I like the JJ books because as soon as you read one, you just can’t stop!

What is your favourite Jamie Johnson book and why?:- I like “Man Of The Match” because I think it is cool when he meets Robbie Simmonds and comes up against Bertorelli…

Who is your favourite world player?:- Paul Pogba.

Which football team do you support?:- Manchester United

Which position do you play?:- I am a striker.

Who do you think will win the Champions League 2017?:- Real Madrid.

Which player reminds you most of JJ?:- Both Cristiano Ronaldo and Neymar remind me of Jamie.

If you could bring one character from the JJ books to life, who would it be and why?:- Dillon Simmonds so I can have a word with him about why he treated Jamie so badly!

What is the best goal you have ever seen?:- Wayne Rooney’s overhead kick against Man City in 2011.

Are you a big JJ fan or do you know one? They could be the next JJ Fan of the Month like Jason! Email Dan at dan@danfreedman.co.uk!