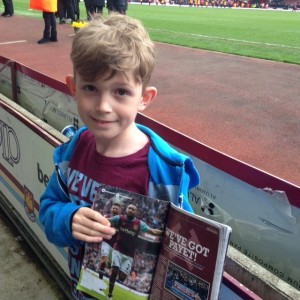 It’s great to be able to feature young footballers on the website and today I would like to introduce you to, not only a player, but a writer as well!  His writing kept me on the edge of my seat and he certainly managed to put a lot of suspense in a small amount of writing.  Well done Thomas and we will see how accurate your predictions for the Euro 2016 are!

Started playing football in:–2012. I play football at school with my friends.  I play LWB.

Football idol:–Dimitri Payet – he is really really really good at free kicks. I saw his free kick against Crystal Palace last season and it was astonishing.

Best Goal you’ve ever seen:-  Bobby Moore’s goal from outside of the box which went into the top left corner. This was a long time before I was born but I watched it on West Ham’s Youtube channel.

Favourite world player:–Carlos Tevez – he is a really good striker from Argentina and he’s a West Ham legend.

Prediction for winners of Euro 2016:– I think it’s going to be England-Belgium in the final and Belgium will win 3-2.  Harry Kane and Jamie Vardy will score for England and De Bruyne will score 2 and Divok Origi will score one for Belgium.

Favourite Jamie Johnson book and why:– Golden Goal because he fights back even though he has a really bad injury.  The only thing I don’t like about this book is that Mike dies.  I like it that he plays for Hawkstone which is his club – it’s my dream to play for West Ham.

Tom has written a short story about a lunchtime football game at his friends – it’’s got his dream goal in it! I wish, he says.

Noah’s line up for today is: Freddie S in goal, defence is Thomas RO, Frederick T, Yusuf K  and in midfield is Oscar and Suleiman and Noah is the striker!  On Kayode’s team Vytaute is in goal, defence is Tom G, Conrad and Harrison B, in midfield is Nile and Michael and Kayode is up front.  Noah kicks off and straight away passes to Oscar, Oscar passes it to Thomas who chips it back to Noah. Noah shoots from the half way line and he scores!  He does the Ronaldo celebration.

Kayode brings it back to the half way line and then he has a go.  He taps it to Michael who passes it to Nile.  Nile strikes it – what a beautiful block by Thomas. Thomas dribbles down the whole pitch and he rainbow flicks over the players, does 2 roulettes and one round the world the he dinks the goal keeper and it goes in -Thomas does the cradle swing  celebration.  2-0! Straight away, as quick as they can in the dying minutes of the game, Kayode taps the ball to Michael who passes it to Nile who passes it back to Michael who through balls it to Kayode who scores…just about.  Then the bell rings. 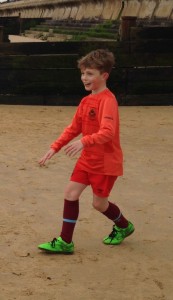