Alex Greene, who is 12 years old and attends the British International School of New York gives us his inside view on how big the world game is in America and where it fits into the sporting priorities Stateside…. 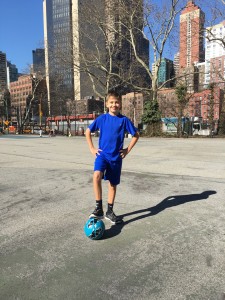 There is no better feeling than weaving a ball across a pitch with poise, dribbling with skill and scoring a beautiful goal as the crowd cheers triumphantly behind you. For me, such games often take place in Central Park where the towering skyscrapers of Manhattan form a spectacular backdrop.

My name is Alex and I’m twelve years old. I’ve lived in New York City my whole life and attend “British International School of New York” where I have had the opportunity to develop my soccer skills!

I can’t get enough of the game but as a country, it seems that not as many people are as passionate about soccer as they are American football.

I love American Football too. My best friend and I watch the regular season each year.  We Americans have dedicated nights to football.  They’re special to people here.  We buy several large pizzas and chow down in front of the screen in anticipation of the game.  We want to see Marshawn Lynch run a 63 yard touchdown and Russell Wilson throw a hail mary.  Our players never cease to disappoint us…well almost never.

Most of us follow American football more than soccer. It was originated here after all.

November 12th of 1892 is a date we will never forget.  It was the date when American Football was born.  Interesting fact no 1: the real name of this sport is gridiron football, because of the grid like lines that marked the field.

Before 1892, American football was played more like soccer mainly in colleges like Princeton and Rutger.  The man most responsible for the transition (fact no. 2) was Walter Camp.  He was known as the “Father of American Football.”  He was the one that developed most of the rules we use today.  It was a game created by one of ours.

However, it must be noted that American Football would not be here if it was not for soccer and also rugby!  Both America needed soccer to develop the many rules and systems .

Some Americans would rather watch the Miami Dolphins then Arsenal FC.  They just like American football more.  If you’re anything like all of my friends at school, you’ll probably be reading this piece wagging your finger in disagreement.  It all comes down to what you enjoy more and of course familiarity with the game itself.

I think soccer will continue to be an important and popular sport here in the US because of its continued universal popularity. Who knows, we might even win the World Cup one day!  As for American Football…it’s quite simply weaved into the fabric of our nation.  When we think of this sport, with touchdowns and fumbles we become nostalgic for a sport that is ours: it’s like America’s baby.