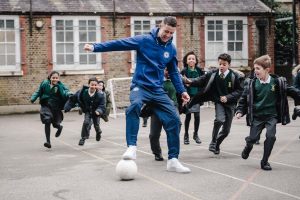 Here’s the text for Fail To Succeed – Dan’s entry for Premier League Primary Stars Writing Stars Competition, in case any schools want to use it!

The competition, open to 5-11 year olds, will be judged by a star-studded panel, namely children’s author and ex-Chelsea legend Frank Lampard, Everton winger and lyricist Yannick Bolasie, Lauren Child, the author-illustrator of the Charlie and Lola series and Waterstones Children’s Laureate and Young People’s Laureate for London, Caleb Femi.

The children have been tasked to write about the theme of resilience, and what it means to them, marked alongside criteria including tone, creativity and originality.

The winning poems will be published in a limited-edition book, whilst other prizes will include author-led writing workshops and Premier League Trophy school visits, as well as poems being read aloud by football stars.

A missed shot, that goes just past the post.

That dropped catch when truly you needed it most.

So, what about the next match? There will, for sure, be another

Will we still turn to the past? Or can we yet recover?

When the next whistle blows, are you the one who can fight again?

Or is that enough? Is, for you. the beginning already the end?

To fail is to finish

To fail is to fall

Rejection the dagger, stabbing you with the thought you’re nothing at all

But what if there was another way?

A thought that keeps recurring

Failure is but a step on the journey. We can keep returning.

But that would change the frame, change the name and it would be pretty cool

Getting up after each and every fall

You knock us down, we stand up tall

We know the secret, Our eye’s on the ball

So start the match, blow that whistle, we’ll still be there to answer your call

And we know that, in the end, the final time we fail, we won’t be failing at all.