Congratulations to Etienne – he is the July JJ Fan of The Month! Dan was particularly impressed with Etienne’s dream 5 aside football team, which can be seen later in this report! 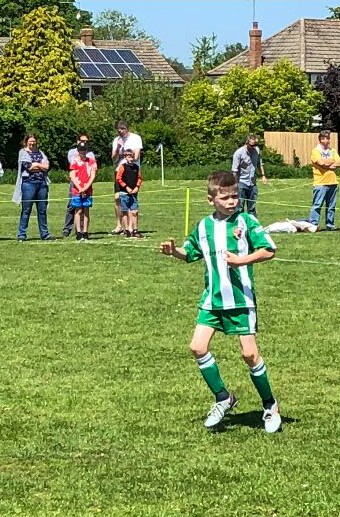 Where are you from?:- Tonbridge, Kent

How did you discover the JJ books?:- I was 7 years old and I saw the books in a football magazine. I then saw there was also a TV series which I always watch.

You are offered to go to three schools- The Grove, Kingfield or the Foxborough Academy School. Which one will you join and why?:- I think I’d like to go to Kingfield as I think I’d have a lot of good friends there.

Why do you like the books?:- I really like the books because they are not only about football, which I love, but you never know what is going to happen next.

Apart from Jamie, if you could befriend any character from the series, who would it be?:- Jack because she doesn’t really get into much trouble and she is a good friend to Jamie.

If you wrote a JJ book yourself, what would you call it? Why?:- I would call it Jamie Johnson: The Wonderkid is Back. I would call it this because in my book he’d be banned from a couple of games because of a red card and then he comes back fighting, scoring goal after goal.

You are the manager of a 5 aside football team. Which 5 players, real or fictional, will you sign and in which formation will they play?:- Van Der Sar in goal, Pele up front and Mattheus and Guillit in midfield and Roberto Carlos in defence.

If you could play for any football team, in the real or JJ World, who would it be?:- Hawkstone

Which football team do you support?:- Chelsea and Tonbridge Angels

What is the best goal you have ever scored?:- This tournament season I was playing for my team, EMC Academy and we were playing Tonbridge Juniors. I curled a ball into the top right corner from the left outside the penalty area.

If you could ask JJ one question, what would it be?:- What is the best goal you have ever scored?

Are you a big JJ fan or do you know one? They could be the next JJ Fan of the Month like Etienne! Email Dan at dan@danfreedman.co.uk!