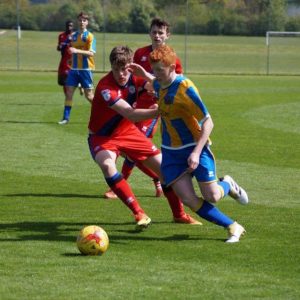 Since the Jamie Johnson books were first released, there have been many fans who have felt as if they were in Jamie Johnson’s shoes – living similar lives and playing football just like him.  Sixteen year-old Rhys Davies is just the same – except that he really was Jamie – for a couple of days, that is.

Rhys’ journey to become ‘Being Jamie Johnson’ began at the Hay Literature Festival, where Dan was speaking. 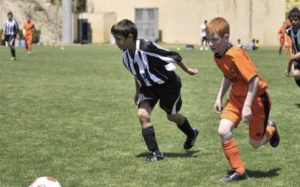 Rhys said, “I went along because I had read Dan’s books over and over. Back then, they were my absolute favourite. I loved them as Jamie reminded me of myself – left footed, ginger hair, and a passion for football.”

Rhys and his father, Gareth, met Dan at his book signing at the festival where Dan thought Rhys looked exactly as he’d imagined Jamie Johnson to be. Rhys also happened to play left winger. They all kept in contact.

At a similar time in 2011, well before the CBBC TV Series premiered, (in June 2016) Dan was investigating the possibility of a film or TV series based on the Jamie Johnson books. He organised a session with Short Form Film, to see how the books might look on screen. Of course they needed an actor – ‘a Jamie.’ Almost immediately, Dan remembered Rhys.

He got in touch and Rhys became the first ‘on-screen Jamie Johnson’ in a short trailer for the book series.

Rhys says that it meant a lot to him to have portrayed the first JJ – he said that he couldn’t wait to get started, and to play Jamie was “quality!”

However, Rhys’ JJ journey did not end there. Recently, he, just like Jamie, was signed up by the Youth Squad of a top football club in Shrewsbury Town, a team in League 1.

Shrewsbury are known for developing top players, including Joe Hart (who has just signed for West Ham on loan) and David Edwards, both of whom have experienced Premier League football and played at Euro 2016 last summer.

Having just finished his first week with the Shrews’ U18 squad Rhys says that things are going well. 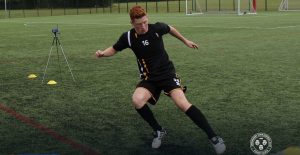 “I’m really enjoying it and loving the experience although it is really hard with plenty of fitness training.   Things are great and I can’t wait for the season to start!”

So, is there any advice that Rhys can give the readers who want to follow in both his, and, indeed, Jamie’s footsteps?

“Just work as hard as you can; practise football as much as you can and, most importantly, enjoy it!”

But there is more football in the Davies family – Rhys’ father, Gareth is a former player too, having played for teams such as Crystal Palace, Cardiff and Reading. Gareth knows all about the positives and perils of trying to be pro.

“I had the same opportunity to live my dream – and it is great to be able to pass on advice to Rhys of the good and the bad that can happen when trying to become a pro. It is challenging; I was in a group of about 10 boys who were offered a scholarship but I was the only one who was offered a professional contract. So, there is obviously a potential downside… after two years arduous work, so many are rejected.” 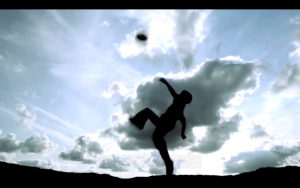 “It is about working hard not only on the pitch, but also off it. It is essential that you concentrate on the academic side to your game, whilst making sure you keep up your education. You also need to be mentally able.  And are you prepared to put the physical work in to reach those goals?”

In a similar fashion to Jamie Johnson’s grandad, Mike, Gareth’s professional career was cut short at an early age due to injury, but Gareth is still involved in the beautiful game, working at the FAW (Football Association of Wales).

He says that on the back of Wales’ successful Euro 2016 campaign, which saw them reaching the Semi Finals and losing to eventual champions Portugal, things at the FAW are going very well.

“I am lucky enough to be challenged every day by some top current and ex-players and coaches, so I’m inspired to be the best I can be and to be a good role model for Rhys.  It’s so important to build professional relationships but a father and son relationship is special, just like that between Jamie and Mike.”

We are excited to see how Rhys’ debut season with Shrewsbury goes, starting in just a few days time.

So that is Rhys and Gareth’s story  – real Jamie Johnson stuff.

If you have your own Jamie Johnson story, whatever it may be, we’d love to hear from you. Email Danfreedman@DanFreedman.co.uk