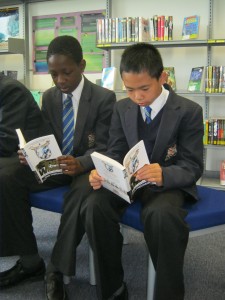 d Oakington Manor Primary School in Brent to run a few writing workshop sessions with a  great class of pupils.

The school, literally in the shadows of Wembley Stadium, was a great place to be and I really enjoyed getting to know each of the young writers as they progressed.

Here’s a taste of what they came up with. I hope you enjoy Karmal’s Jamie Johnson action/love story!

Jamie stepped up to the penalty spot. He stared at the goalkeeper and then the referee blew the whistle. Jamie ran and blasted the ball but the goalkeeper touched the ball to make the save. Jamie fell in shame and cried until the stadium was dark and cold. He walked home and he never had dinner.

After a while he met a girl that really liked football. After a week it was just the end of the match. There was another penalty. Jamie took five steps backwards. Jessie was watching as he ran and ran and blasted the ball on the post but he kicked it and scored. The amazing crowd was cheering and Jessie was cheering.

A week later, Jessie met Jamie in the park. She had a confession.  Jessie is Dillon’s sister. Jamie gasped. However, Jessie never liked him because he was so bossy and shouty. Jessie was Jamie’s number one fan and they were best friends forever.

Meanwhile, Karmal’s class-mate Ali composed this little story which features ‘a ball in the night’….

Jamie Johnson stepped up to the penalty spot and he ran really fast. He never saw the ball and he did the ‘bicycle’ kick. Then a boy called Sam was in the red team but Jamie was in the blue team. Jamie is not friends because Jamie is a nice boy but Sam isn’t a nice boy.

Then Jamie curled the ball and he shot the ball.

“Goal!” screamed Jamie. The crowd cheered and did the Mexican wave.

The ball was standing there and no-one got the ball.

Two hours later Jamie got the ball in the night. He crashed the ball and it landed into the goal and he pretended to be in the football match again.

Sam went to the house and he stole the ball from Jamie. The grandfather came to Jamie’s room and saw Sam.