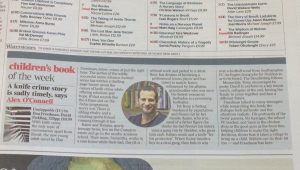 Dan’s brand-new novel, which covers a variety of topics such as sibling rivalry, sporting ambition, knife crime, gangs and peer pressure, was recently named The Times’ Children’s Book Of The Week.

Dan said: “I’m really grateful to all the schools, teachers, librarians and readers for their support with the book. Thinking about what to write after Jamie Johnson was a long process so I hope Unstoppable can play a positive role in opening up conversations about a range of subjects.”

There have been quite a few early reviews, such as one by The Book Trust emerging for Unstoppable, which was described as a “thrilling page-turner” which feels “authentic” by The Times arts editor Alex O’Connell.

Dan has been travelling around the country speaking about Unstoppable to children in schools and global audiences on Sky News, talkSPORT and BBC Radio 5 Live (which you can here – at 2 hours, 33 minutes, 10 seconds)

If you would like a book which challenges you to think about the next step in your life, then UNSTOPPABLE is the book for you.

Take a look at the video below to see Dan speaking about Unstoppable!

Want to listen to a short extract? Here is the section Dan read on Radio 5 Live…