This is a short story I wrote about my love of football and someone that inspired me to tell my own stories.  Not all writers start off writing long books and writing short stories is a great way to develop your own writing skills and style.  This piece of writing is only 366 words.  I challenge you to write your own story in as many words!  It can be about anything you want, true or not.  Put pen to paper (or fingers to keyboards) and most of all,  have fun! 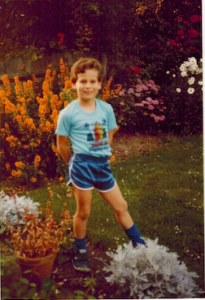 This is a true story.

I actually enjoyed going to school. Well, on Wednesdays, anyway.
On Wednesdays it was Jack’s turn to give Adam and me a lift in to school.
Jack was my neighbour Adam’s dad, and he had the best job in the world. He was a writer. He’d written lots of things that had been on TV and he’d even written films too.
That meant that he was brilliant at telling stories. With only his deep, rasping voice, he could make his stories as exciting as watching a film at the cinema.
“Tell us a story, Jack!” we’d say as we got into his car.
Sometimes he wasn’t in the mood, but we always knew how to wear him down.
“Go on!” we’d beg. “Tell us a football story.”
Jack smiled. He loved football as much as we did.
I’ll always remember one of Jack’s stories about a striker called Derek Dooley. Jack said Derek Dooley was the best striker he’d ever seen.
He was big, strong and quick – unstoppable. He scored 62 goals in his 61 games and the whole country knew about him. He was going to be a star.
Derek Dooley was just about to play for England when he got injured. He’d gone in for a tackle with a goalkeeper and broken his leg. His leg became infected with something called gangrene. In the end, he had to have his leg cut off.
“What?!” Adam and I said. “He had his whole leg cut off? What happened to him?”
But it was too late. We’d already got to school. The journey had gone in a flash.
“I’ll tell you another story next week,” Jack promised. “Only seven days to wait.”
I went into school and spent the rest of the day thinking about Derek Dooley and what he might have achieved if he hadn’t broken his leg.
That was twenty years ago and I’m grown up now, but I can still remember those stories and those journeys to school.
I like to think that Jack would have been happy at what I did when I grew up.
I became a writer. I tell stories to children. Often about football…