My sixth Tip for the Top is… 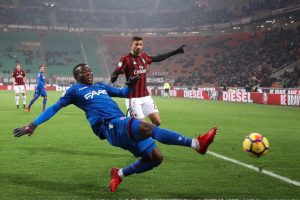 Club and League: Bologna, Serie A

Overall: My next Tip for the Top is Donsah, the Ghanaian warrior from Bologna in Serie A. He is a true box-to-box midfielder and has a certain N’Golo Kante air about his play style. Although not necessarily the tallest, Donsah makes up for this with his aggressive tackling and willingness to win back the ball and drive forward with it at pace; another key attribute of his.

Despite his small stature, Donsah combines a powerful running stance with a physical nature to muscle opponents out of the challenge.

Prediction for future: It doesn’t seem that the Ghanaian will be at Bologna for much longer after emerging as a key player for the Italians.

After Paul Pogba’s convincing of Jose Mourinho to switch a 4-2-3-1 formation to a more fluid, attacking 4-3-2-1, Donsah could be the ideal “carrilero” that United require. Don’t be shocked if you find him at Old Trafford; he’s that good.

However, if Mourinho may prefer Ander Herrera or Scott McTominay, in which case a move to Turin giants Juventus would be a more welcoming prospect for the brilliant midfield battler.

Rafa’s view: I think he is a fabulous player who has gone under the radar due to not playing at one of the top clubs. It’d be interesting to see Donsah exposed to Champions League football; whether he could adapt to playing against the world’s best.

If he moved to the Premier League, he would slip in with definite ease. The fast tempo games we see in England are the types of scenarios Donsah loves; where he can cover every blade of grass. One to really watch out for in the coming seasons.