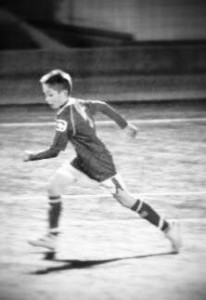 It’s always great to hear from young fans and footballers of every age and ability,  to find out what inspires and motivates them to achieve the best that they can.  I have been lucky enough recently to speak to one of these talented young players to find out a bit about what drives his love for football.  Sean came to my attention when he wrote a comment on this website, asking for advice on how to build confidence during matches.

Sean has been playing football since he was six, and was hooked after going with his Dad to watch Crewe play. In his football career, he has already been to Madrid to play, and has been scouted and signed up to play for the Crewe Academy.

Like Jamie, Sean is a left winger, and was signed up after playing for a short trial.   Given the position that he has already achieved, he is obviously an accomplished and talented player.   I was keen to learn more about Sean, and find if he has any tips that could help other players to work their way to the level that Sean has, dealing along the way with obstacles that we all empathise with, such as nerves during games.  I thought that it would be great for other young footballers, who are just starting out,  if Sean could answer a few questions and give some tips.

Q: What do you do when you’re not playing:

Sean:   When I’m not playing I’m usually trying to get a game with older lads on a field near my house or chilling on the Xbox.

Q: Who is your favourite player and why?

Sean:  My favourite player is Nick Powell.  He played for Crewe a few years ago through the academy then within a season he started playing for Manchester United.  He’s my favourite player because he plays with flair and skill in a unique way.

Q: What’s the best game you’ve ever played in?

Sean:  My best game was against Real Madrid. It was  an evening game where both teams gave their all.  In the end we were unlucky to lose 6-2.

Q: How difficult do you think it is to become a professional footballer?

Sean:  Outrageously difficult, because it’s not just about your technical side and how you are on the ball.  Personally I think that mentally is one of the most difficult techniques to pursue.  Are you confident you’re going to do well when you go into a game?  Are you one step ahead of your opponent?  You also have to be at the right place at the right time.  A lot of this is all down to luck !!!

Q: What advice do you have for other kids who want to get signed up and play at a professional academy like you do?

Sean:  My advice would be to do what you’re told, play where you’re told to, play despite whatever type of player you think you are, and forget the fear of failure.

Q:  How did you feel when you started playing for Crewe?

Sean:  I felt that I didn’t fit in and I was really nervous in my first season.  I just learnt to say to myself- ” look you’ve mucked up there just make sure you don’t do it again “.

Q:  When did you start reading the Jamie Johnson series?

Sean:  I picked up my first Jamie Johnson book when I was 9,  and I have now read the whole series.

Q: What do you like about the Jamie Johnson books?

Sean:  I find them inspirational and I they show me how you can make it if you really try

No matter what is going on,  never give up!

I predict that we will hear the name Sean Lawton a lot more in the future, and wish him all the best.