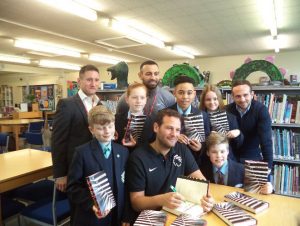 However, he was not speaking alone, as joined by was Mansfield striker Craig Davies, formerly of Manchester City.

The Year 7s were very excited to hear all about the new book, and to hear Craig speaking about his experiences and football career. The pupils were also very keen to participate in what was an engaging Q&A with the Dan and Craig.

Dan later commented; “Craig spoke so brilliantly. He talked about his own life and he also talked about some of the decisions, good and bad, people he knows have made in their lives.

“Unstoppable is about many things, but one of the main elements is about the choices we make in life. To have someone as inspirational as Craig talking so openly about this subject was fantastic.”

Dan was also joined by Craig’s agents, Matt Kleinman and Alex Levack of Sidekick Management, who very generously provided each and every Year 7 pupil present – 180 of them – a free copy of Unstoppable.

“The event was everything we could have hoped for,” said Dan. “Massive thanks to Matt, Alex, Craig and the whole team at Sidekick Management for supporting us and making it all possible. To see the students being so excited to receive their books and to start reading them was such a gratifying sight.”