It was fantastic to celebrate 10 years of Premier League Reading Stars this week.

PLRS is a scheme which encourages youngsters to read through their love of football. Something I’m right behind. 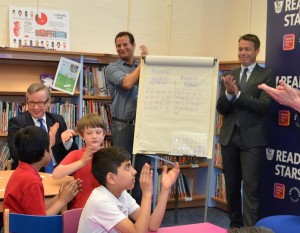 To mark the event, Jim Sells of The National Literacy Trust and I held a workshop with some pupils from Smithy Street Primary School in Whitechapel. We discussed our love of football and I talked about the story behind the Jamie Johnson books.

Also there to support and join in were Secretary of State for Education, Michael Gove, Chief Executive of the Premier League Richard Scudamore and England International Graeme le Saux. Big players.

During the session, I read an extract from The Kick Off, ending on a moment where Jamie Johnson is just about to take a penalty. We then ran a quiz, asking the pupils to come up with the best words they could think off to describe Jamie’s feelings a) if he scored the penalty or b) if he missed. 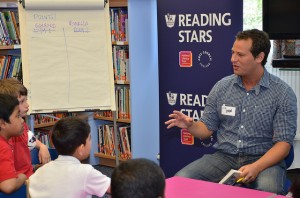 With Mr Gove and Mr Scudamore each joining one of the two teams, competition levels were high! I awarded the most points to the boy who said that if Jamie missed the penalty he might feel ‘ashamed.’ I thought that was a great word.

It was a real privilege to be part of the day.

Here is all the info on Premier League Reading Stars