Every month, we name a huge Jamie Johnson fan as a Fan Of The Month! This fan could be anyone, from anywhere around the globe. He, she or they could come to our attention in several diverse ways, for example, at a school Dan attends, a piece of writing he or she sends to Dan, or a fan-mail or letter that they have sent. We like to have an interview with the winner as well.

Congratulations to Avi – he is the February JJ Fan Of The Month! 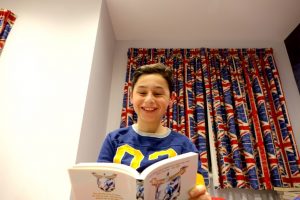 Where are you from?:- London

How did you hear about the JJ books?:- My Dad showed them to me.

What is your favourite Jamie Johnson book and why?:- Final Whistle because it gives an incredible conclusion to a fantastic story.

Where is the most unusual place you have ever read a JJ book?:– In the garden

Which football team do you support?:- Arsenal through and through

Which player reminds you most of JJ?:- Ousmane Dembele, because he’s a left winger, he’s young and he plays for Barcelona.

What made you get into football?:- Everyone playing it at school.

You are the manager of a 5 aside football team. Which 5 players, real or fictional, will you sign and in which formation will they play?:-

If you wrote a JJ book yourself, what would you call it?:- Life JJ

Do you have any special football skills?:- Does curling shots count?

You are offered to go to three schools- The Grove, Kingfield or the Foxborough Academy School. Which one will you join?:- Kingfield 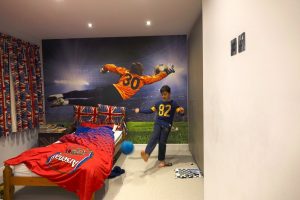 Are you a big JJ fan or do you know one? They could be the next JJ Fan of the Month like Avi! Email Dan at dan@danfreedman.co.uk!