Congratulations to the April Fan of the Month – Felix! He came to our attention after he sent in an email to Dan, along with a video of his football skills and a message for JJ, which can be seen in the report! 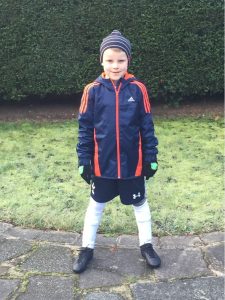 Where are you from?:- Hertfordshire

How did you discover the JJ books?:- I had seen JJ on TV and then a Book Fair came to my school, they were selling The Kick Off and I really wanted to read it!

You are offered to go to three schools- The Grove, Kingfield or the Foxborough Academy School. Which one will you join and why?:- I would join Kingfield because I would like to play alongside JJ!

Why do you like the books?:- Because I love football (I’m really good!) and I love reading!

Apart from Jamie, if you could befriend any character from the series, who would it be?:- It would be Ollie because he is funny and a little bit cheeky! (I mean a LOT!) 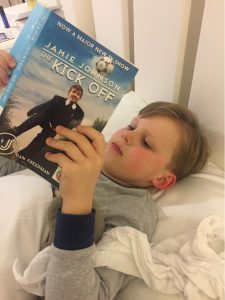 What is your favourite JJ book and why?: The Kick Off! (It’s the only one I’ve read so far but I am saving up my pocket money to buy the other books!)

If you wrote a JJ book yourself, what would you call it? Why?:- It would be called The Football Boy! I think it`s a cool name.

You are the manager of a 5 aside football team. Which 5 players, real or fictional, will you sign and in which formation will they play?:- On the left JJ, on the right Roberto Firmino,  in the centre Cristiano Ronaldo, in the midfield Dele Alli and in goal Hugo Lloris!

If you could play for any football team, in the real or JJ World, who would it be?:- Tottenham Hotspur

What is the best goal you have ever scored?:- Scoring from midfield with slide tackle from the right wing.

If you could ask JJ one question, what would it be?:- How did you get so good at football?

Do you want to be named a JJ Fan of the Month? Do you know anyone who wants to be? Get in touch at dan@danfreedman.co.uk and you could follow in Felix’s footsteps!